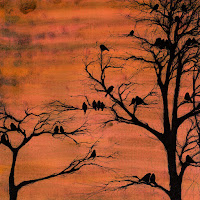 The Italian Stallion himself, Trento, Italy SGM Bureau Chief Aaron Giazzon comes through with another banger form the Old Country.
UT hail from Genoa, but, as noted the last time we posted them, you would be excused if you assumed they originated in the American Midwest. They bare many of the Rust Belt (and adjacent) hallmarks of a band in proximity to Shellac, Slint, Big'N, Rodan, Bitch Magnet, and Janitor Joe. But, again, we covered this the last time around.
So what's different on this new record?
Glad you asked.
Essentially it's just "better". The first one was really good, as it mined the rich vein of push-and-pull noise rock, with an undercurrent of melody to keep it from falling in on itself. And this time around, they do the same, only...better. The ugly parts are uglier, the driving parts are driving harder, and when they catch their breathe, those parts are more "Slint-y". Which is a good way to catch your breath. Delta Gamma Epsilon Beta also manages to weave in some indie rock passages, and the occasional big alternative rock hook. Which, hey, who's complaining? Those are all fun things to listen to, so why not work it all in together, like a well crafted sandwich?
I've been really enjoying this record a lot. I think you'll like it too.